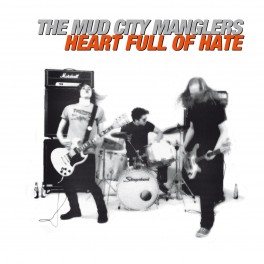 LP
Mud City Manglers – Pittsburgh, Pennsylvania’s longest running sociopathic punk rock and roll band to have retained their livers, let alone their drummer, are proud to announce their second full length album: “Give Me the Hammer” available on October 31st 2020 through Beluga Records (Sweden), Spaghetty Town Records (USA) and Ghost Highway Recordings (Spain).
Formed in 1996 by Ted Tarka and Brian Porter, the band started out as a three piece influenced by shit like Chuck Berry, the Mummies, Thunders, DANGERHOUSE, Detroit madness (you know what that means) and 80s teenage (real) metal shit. They released honest-to-jeebus vinyl 45 RPM records on a multitude of underground labels. Doug from Submachine (original bassist!) put out their first single on his Republic of Chesterfield label, which led to midstate PA boy Subarton putting out their next two singles on his NYC 007 records label, becoming labelmates with the Hellacopters, Nitwitz, and Gluecifer, among others in their early years. That led to a full length LP on Australia’s Stolen Records label and the band toured the United States and Europe.
Needless to say, there were many beers, etc. along the way. Eventually Ted conned Metal Mary into playing bass and then Matt joined the fold. Soundmen became angry x2.
Next up came a split 7”with Pittsburgh’s very own Plastered Bastards on Sock It! Records, and then a recording session for a full length ensued – which was picked up by Beluga, Ghost Highway Recordings and Spaghetty Town.
If this one sheet sounds cut and dry, it is because there are things that would horrify you. You might run away, fast. You would buy hand sanitizer by the gallon and crab medicine, and probably throw out your couch. You might question your own life choices. This album is the product of some horrifying shit, captured mostly live. Crank it, crack a beer, ride the rails. Nothing on this fucker is fake.
Good Luck,
The Manglers

Añadir a la lista de deseos
SKU: GHR-247 Categoría: LP Etiquetas: Hard-Action Rock, Mud City Manglers, Punk, Punk-Rock
John Holstrom editor of PUNK magazine once said: The Manglers play a raw, blistering, p(i)ssed-off punk that’s as insane as anything since the original Stooges. Anyone who lives on the east coast should check these guys out ASAP. They rip live!! Fans of stuff like Electric Frankenstein, The Hellacopters, Gluecifer and the Backyard Babies need to hear the Manglers.

We love loud guitars and this Beluga Records/Ghost Highway and Spaghetty Town Re-Release certainly ticks all the boxes as far as loud goes. To be fair these cats are the bastard children who will inherit the earth that The Stooges once strode on. ‘Shit You Talk’ can testify to that.

This particular bad boy is the long since deleted debut from the band and not since 2000 have you been able to get hold of a copy for less than a small mortgage off the likes of Discogs but now thanks to the true believers at these labels its available on a platter of wax. ‘Heart Full Of Hate’ has dated really well like a Ramones Leather or original SG it just gets better when it’s a little worn and knackered out.

Songs like the rapid barroom brawler of ‘1234 Motherfucker’ is nasty and up for trouble punch to the beak that’ll make your eyes water for sure. Theres no hanging around as one track collides into the next and just rips. Its riff after mother fucking riff for sure and The Manglers should have been a bigger success much the same as our own shit island heroes The Hip Priests the Mud City Manglers go full tilt and don’t deal in bullshit from the opening salvo to the explosive finale its all hands to the pump and rock the fuck out! it works and it still works to this day as a formula but only if you have the tunes. Boy, do the MCM have the tunes. It’s twelve bangers and thanks to these labels for not giving up on Rock and Roll and producing these long lost diamonds and pulling them out of the rough for our listening pleasure and getting them out to a wider audience for a second time.

Get yourself one more Beer and wrap yourself in any shade of black and don’t forget to keep a knockin’ because ‘Heart Full Of Hate’ is always rockin’ and will be another cool as record in your collection its equal parts Stooges, EF, Motorhead and a whole lot more besides and if you missed them first time out then don’t snooze this time get on this Hot Rod of electric guitars and snarling vocals its a blast!