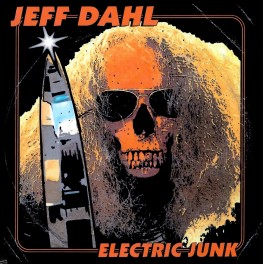 Wondering if we’d ever get another record from Jeff a couple of years ago and then low and behold Made In Hawaii rocks up and in the blink of an eye there was the collaboration with Swedens “Demons” and boy Jeff was back in the saddle.  Last year we got the ‘MR Antlers’ EP which gave us a brief glimpse into his next record and after a brief wait followed by the wonderful people at USPS and Royal Mail taking an eternity to get a copy to my door it’s better late than never.  I was like a kid at Christmas just after Christmas as the virtual needle dropped on this new album from the mighty Jeff Dahl. Dahl plays guitar, bass and vocals with Sam Bradley playing drums and Dave Swaim on piano and that’s it as ‘Until We Bleed’ doesn’t so much fall out of the speakers but lurches out and grabs my head like some horror flick unfolding. The guitars are raucous whilst the bass and drums are measured and driving forward with purpose. Great way to open any album let alone album number Thirty plus.  In itself is some achievement but to sound so vibrant, enthusiastic and relevant is a beautiful thing.

To follow that up with a less rapid but groovetastic ‘Superstar Cafe’ that had Iggy come up with this the music press would be heralding the return of the messiah but sure its got that ‘Funhouse’ vibe happening on the hypnotic riff.  The best track lyrically and groove-wise Dahl has come up with for a long long time.

I am so wasted is rapid like the Dead Boys were but ‘the Violence Squad’ is a real trip with its stomping handclapping journey back to the 70s like a night out looking for a good time with Bolan and Hunter two musicians who I know Dahl holds close to his heart and who would be proud to have penned this one. Everything is like a perfect storm from the foot-stomping rhythm to the floor tom rattle and shake to the sweet guitar solo.  Another excellent song.

To get to the halfway point of the record and have the bottleneck and woohoos! is a thing of beauty and again another artist who I have the utmost respect for manages to knock me over with a new record that sounds so good. Its a real rush hearing stuff like this and Sam on the drums deserves a mention here for smashing the cans up with such passion and managing to drive the song with his monster beats it leaves nothing but a good taste ‘In My Mouth’.

As we enter the home straight ‘NFG’ is anything but no fucking good.  Man, Deniz Tek yeah he of Radio Birdman channels that Thunders meets Rono tone and solo licks for the guitar breaks its a blast boys and girls like if Bowie had gone full punk rock after he was Ziggy – wonderful stuff he also lays down the solo on ‘Violence Squad’. Then the Dahl curveball to close the record ‘Weirdly, Richard’ is a piano lament and a much needed come down as if to prepare you for entering the real world again after taking the ‘Electric Junk’ trip.

Mr. Dahl sir I salute you.  Another day another fantastic record and I have to say head and shoulders one of the best records you’ve ever made.  Sure I’ve only been playing it a couple of weeks but every time I’m hearing something new, getting different influences and vibes on each play and the pecking order of my favourite track is moving up and down the tracklist every time.  I think I can safely say with the new decade so fresh this will be one of the albums of the year and if you’re looking for a fix of Dirty badass punk rock and roll then you need look no further. Jeff Dahl ‘Electric Junk’ all day long will tick every box you need ticking – Buy it!