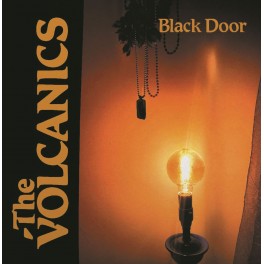 Volcanics- Black Door LP.  Perth Australia’s The Volcanics spew forth a red-hot rock and roll eruption on their fifth album ‘Black Door’.  These Aussie fucks take cues from the raw Detroit sounds of the MC5 and fellow down under countrymen Radio Birdman blasting through 11 tracks of direct, guitar-heavy, hard-hitting rock ‘n roll showing even further versatility in the world of thick riffs and hard driving rhythms.  These are limited to 500 copies and the first 100 are on limited Florescent Green Wax.

Every once in a while an album comes along that almost completely flies under your radar but the tunes on offer stop you in your tracks and kick you straight between the legs like some musical steel toe capped boot.

‘Black Door’ the all-new eleven tracker from Australian five-piece The Volcanics is just such a record. Boasting a Jim Diamond mix job this record cuts, like a fucking knife, the tunes are that sharp. The songwriting adding a fantastic pop twist to the already well-worn garage rock/punk rock formula that sees oh so many bands falling at the final hurdle when it comes to having that extra edge to make them stand apart.

Perhaps The Volcanics secret ingredient is the huge presence of vocalist Johnny Phatouros who shines throughout, and where some singers might just put their foot on the monitor and scream out belters like ‘Talk’  and the album’s title track, Johnny throws in off-kilter vocal hooks that at first seem at odds with the band’s throbbing backbeat, however once they sink in you cannot help but marvel at just how simple and effective his approach is. In many ways, he is like the band’s Pelle Almqvist or their Skye Vaughan-Jayne.

Talking of Skye for a moment the immediate buzz I got when listening to ‘Black Door’ for the first time was this could very easily have been the follow up to The Chelsea Smiles awesome ‘Thirty Six Hours Later’ album from 2006, and if you are familiar with that classic, you’ll know that we don’t make comparisons to that work of absolute punk rock genius that often here at RPM towers. So, if that’s sparked your interest then ‘Changes On My Mind’ is the tune I suggest you listen to first (via the Bandcamp link below) and trust me when I say “have a cold beer in hand when you press play” and “just let the music do the rest.”

With influences as wide-reaching as You Am I and AC/DC The Volcanics actually remind me more of Radio Birdman and Midnight Oil, albeit with (thanks to the aforementioned Diamond mix) a sound that manages to hammer home the intensity of the band whilst retaining the clarity of the melodies, the latter being the essential difference and why tracks like ‘2000 Years Ago’ and ‘You Don’t Even Know The Song’ work so bloody well.

To be honest I’m a little bit gutted that I’m only just discovering The Volcanics now. five albums into their career. Still better late than never eh, and when the first tracks I get to hear by them are as fucking fantastic as those on ‘Black Door’ then the real positive about this situation is I’ve now got four more Volcanics albums to look forward to catching up on.

Look I can’t recommend The Volcanics highly enough, they are chock full of positivity in an age of the negativity and I challenge you right here and now to go listen to ‘Black Door’ and not get the same buzz I did the first time of listening.

Album of the year material? You betcha.