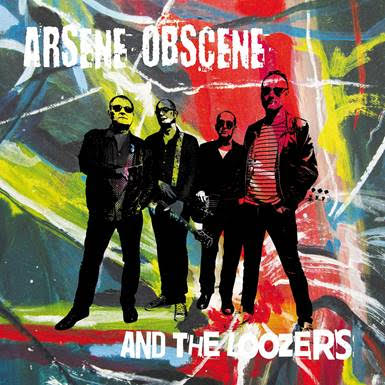 Dangerhouse  :
«First album of Arsène Obscène and the Loozers ! Historical figure of the Nice scene for more than twenty years with Electric Mormons, Veines, Flaschen or Motarlozer, Arsène sometimes also puts on his writer’s coat («Punk Outsiders 1975/85″ on Camion Blanc, as well as a few collections of poetry) while remaining faithful to his punk-rock roots… The album goes on like a bullet, 12 radical tracks (of which nine are less than two minutes long ! ) evoking as well the Spits as the Vapids, with the Ramones ’76 DNA of course, with the brutal side of the Saints of the beginning and even a melodic touch of powerpop à la Nerves but not only… A co-production with Dangerhouse Skylab, 300 vinyl copies, release on September 15, 2021 !»

Mono-Tone Records :
«First album of this brand new French band born on the ashes – still burning! – of the Electric Mormons, Flaschen, Veines and Motarlozer, garage and punk bands well known by afficionados. Fast like the Ramones, brutal like the early Saints, powerpop like the Nerves, rock’n’roll and stylish like Crime, twelve tracks (ten of which are less than two minutes long!), twelve instant hits! Melodic and brutal, energetic and catchy, the songs of Arsene Obscene and his Loozers are made to be sung in the shower AND in the stands of a stadium !»